I can’t believe we have finally arrived in South America! My heart filled with joy as we landed in Cartagena’s airport, knowing that we had concluded our Central American route—after almost 2 years—and were a little closer to Brazil. Also, from all our talks with other over landers (aka, road travelers), we held high expectations for Colombia….and indeed it was an extraordinary nation, being one of my favorite countries so far along with Mexico and Costa Rica.

Famous for its colorful buildings and calles packed with fruit stands, Cartagena was a sight for sore eyes—especially the famous forted town. We slept in the parking lot of an old hotel a little ways from downtown, and spent a few days doing a hardcore clean-up in the rv since we hadn’t seen it for a few weeks. But once everything was clean, off we went to the streets of the historical center, which is surrounded by an enormours rock wall extending for 11km: Fortress of Castillo San Felipe de Barajas. Cartagena, once a major port founded in 1533 by the Spaniards, was an explosion of sounds, smells, and colors, as well as history: the shouts of streets vendors and fruit sellers, the bright colored houses with white varandas covered by vines, the smell of freshly-fried empanaditas and arepas, and the humid, sunny days are just a few characteristics of the city. As we strolled through the busy streets, we saw so many tiny alleys emerging here and there, all filled with restaurants, tiendas (visit Agua de Leon for beautiful, authentic Colombian clothing), and delicious cafes—our favorite being San Alberto, Colombia’s most award-winning coffee. The tiny cafe had just a few tables, but we befriended the manager and it became a habitual spot for us; additionally, they prepared the best lattes and cappuccinos, and their chocolate cake with dulce de leche was to die for (especially when heated). Two other spots—that weren’t too pricy due to all of the tourism—which we loved eating at were Donde Olano, whose robalo with lemon sauce was great; and Di Silvio Trattoria, where we enjoyed dinning at with friends (one from Minas Gerais, Brazil, and the other from Southern Brazil) after visiting Islas Del Rosario. The Italian restaurant is located in a very popular neighborhood of Cartagena, Getsamani, where many tourists visit in order to take photos of the street with “flying” colorful umbrellas at Calle Angosto and try the local cuisine. Besides visiting the forted city, two other major attractions were the Castelo de San Felipe de Barajas, a massive fortress built in the 17th century by the Spaniards, and the Islas Del Rosario—a must go! 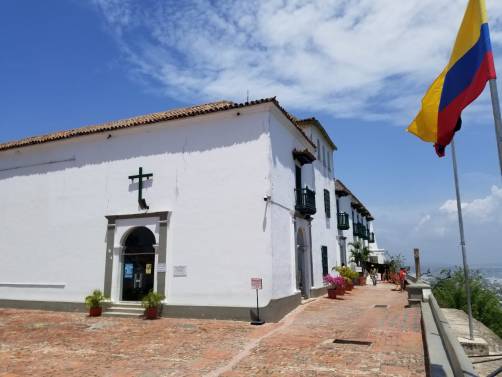 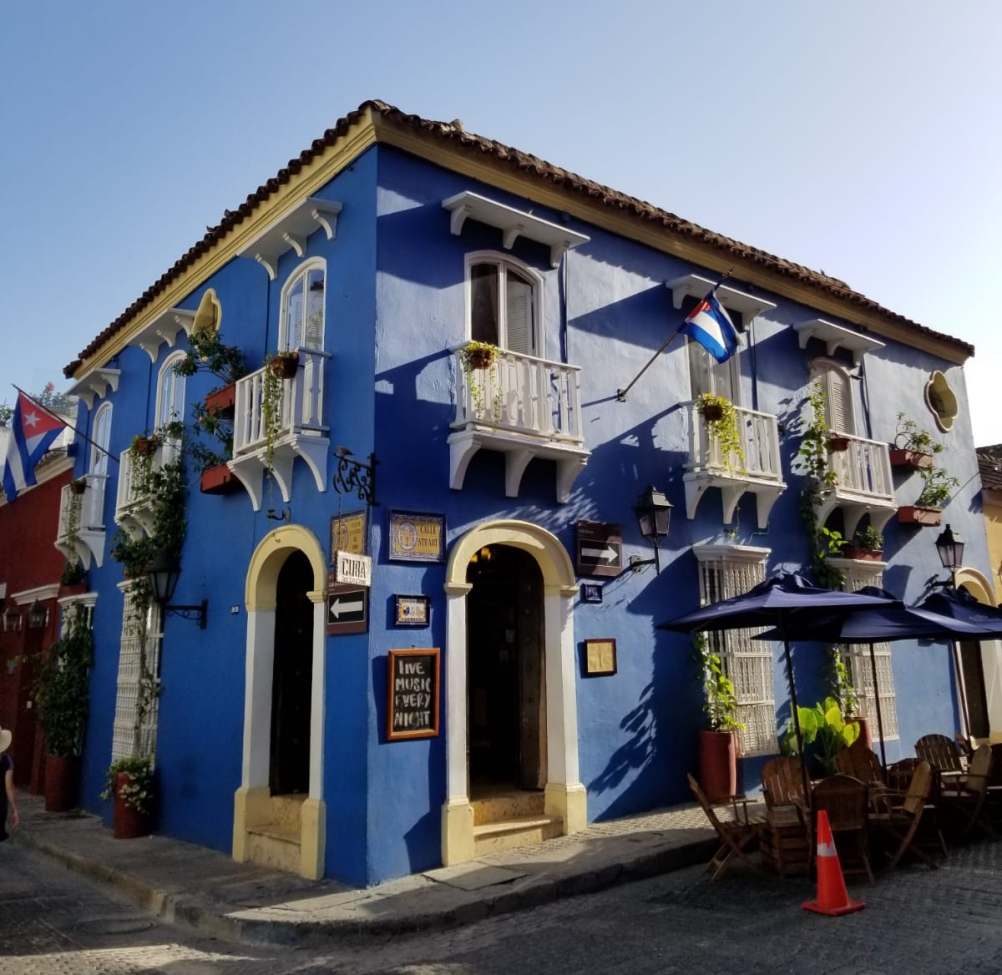 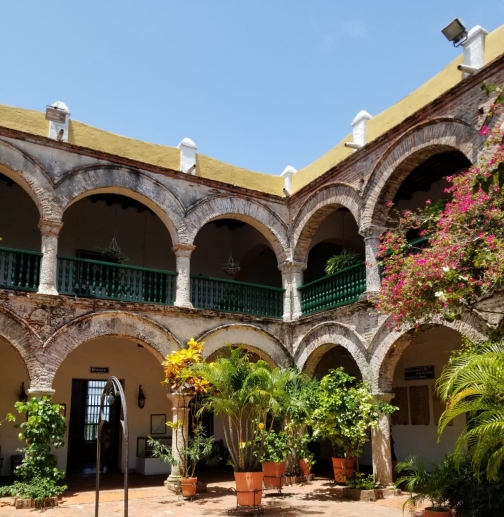 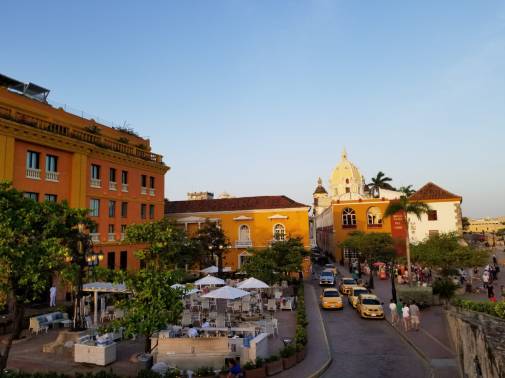 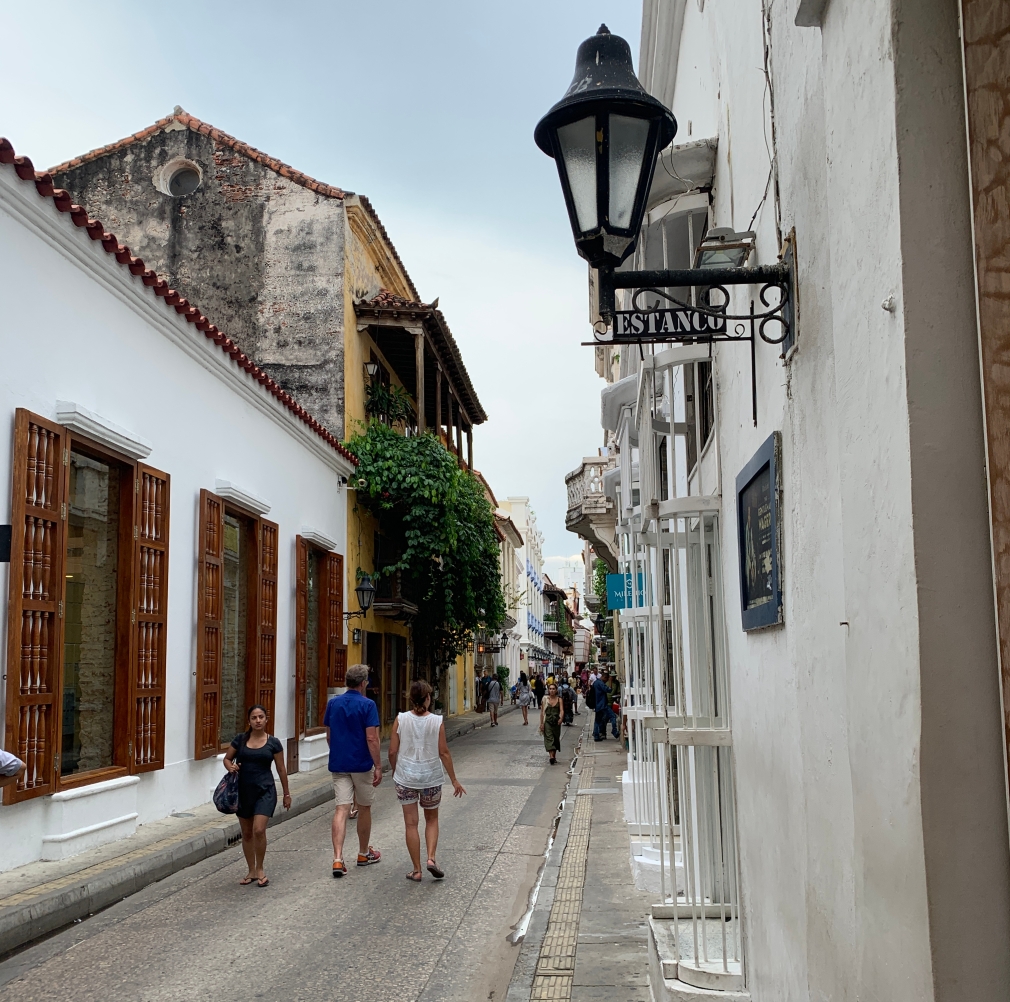 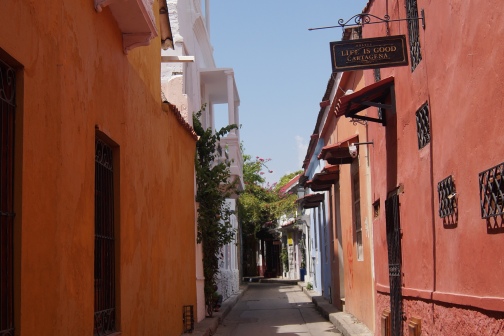 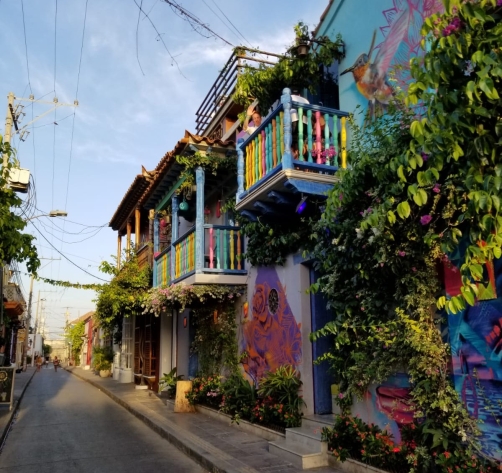 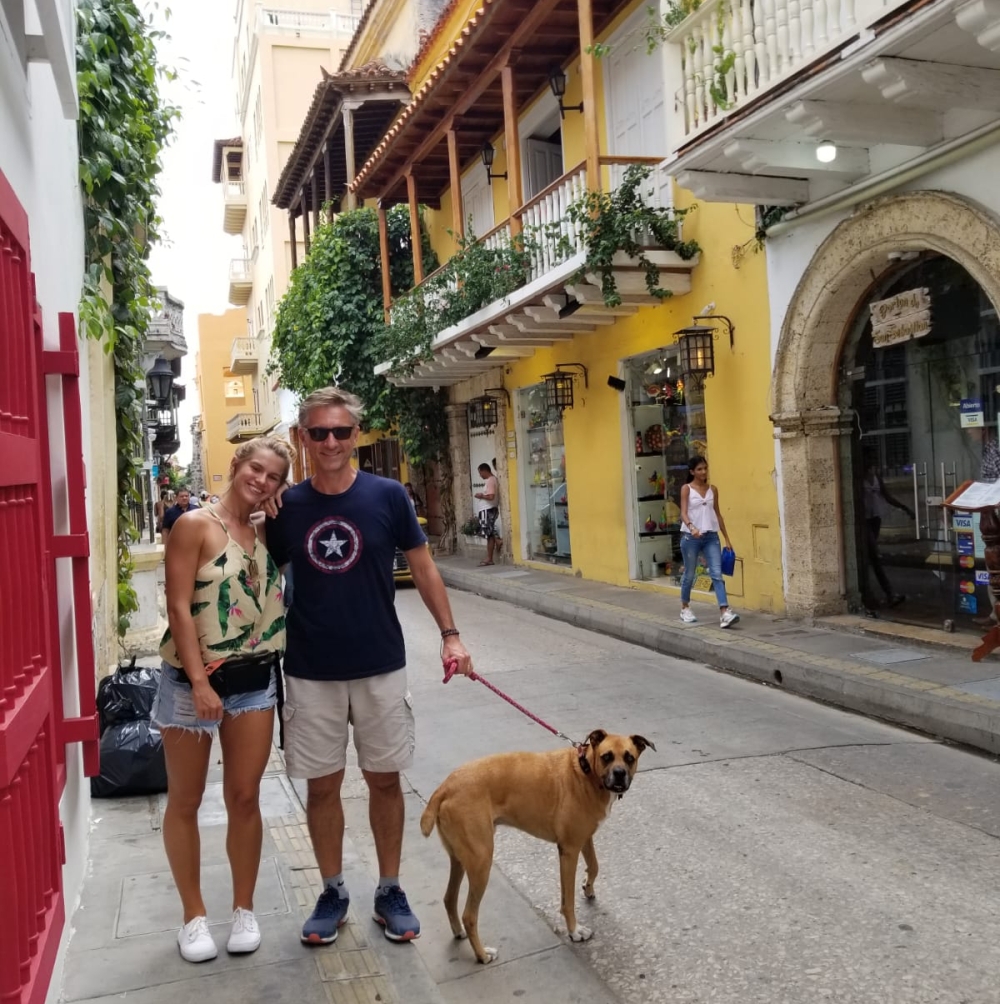 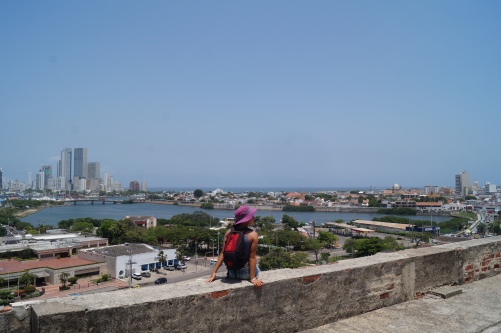 Even though Cartagena lies in front of the Caribbean Sea, the beaches weren’t the prettiest; nevertheless, 30 min away by boat was enough to be blown away by the turquoise colors of the water. My family and I chose to do a day-trip to Isla Pirata, known for its abundance in corals and sea life. Once arriving on the tiny isle, we had a few hours to explore the coral formations…but beware, people will benefit by taking their own snorkeling (cheaper) gear and are only allowed to snorkel with a guide (the company which drove us to the island offered tours, and told us to not hire local guides); however, we found the perfect local guide—his name is Josemaria, and his boat is Vamos Con Dios—who took us to the most exclusive spots, away from all the other tourists, and even showed us Pablo Escobar’s sunk airplane and his summer house (about $25/person). 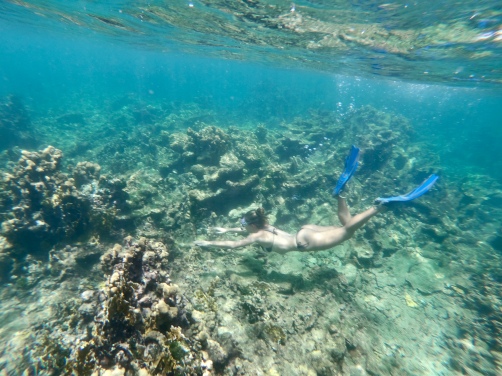 With Cartagena behind us, we drove towards Venezuela, contouring the beautiful Caribbean coast until we arrived in Casa Grande Surf Camp late at night.The camp is literally right on the beach, I mean…we parked on white sand, coconut trees hung above us, and the salty smell of the sea impregnated our home. Early next morning Maria and I waxed our surf boards and paddled out, surfing for a few hours with a few locals, and soaking up the sun. Nearby our camp, about 20 min by car, is located Tayrona National Natural Park—a paradisiac natural reserve. Tayrona is highly coveted by hikers, backpackers, and all kinds of tourists, since one may camp or stay in a hotel inside the reserve. As soon as we arrived in the park, we hired horses (there are pedestrian trails too) to do the trail until Playa Cabo, one of the most famous spots of Tayrona. Playa Cabo is dreamy…and honestly, only photos can do justice to the landscape. Besides laying on the sandy beach and climbing the lookout (where one can sleep on hammocks), I would strongly suggest snorkeling in Cabo! 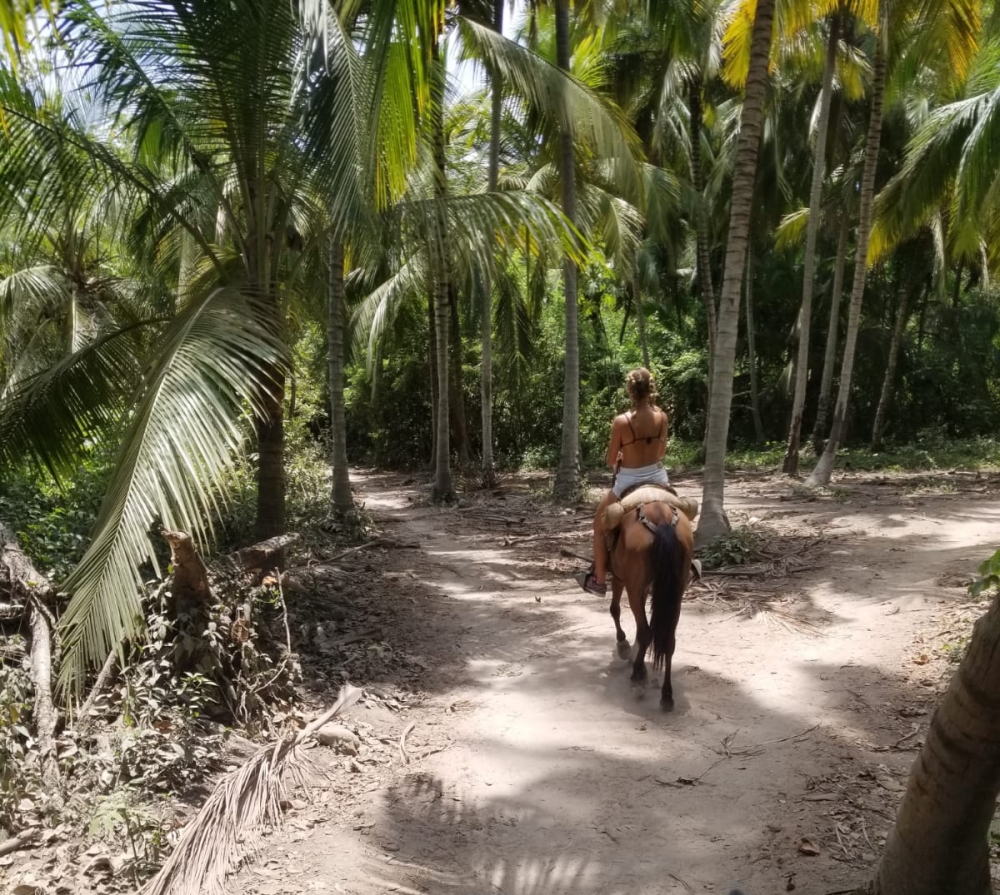 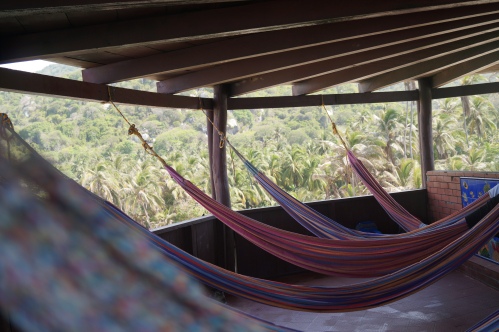 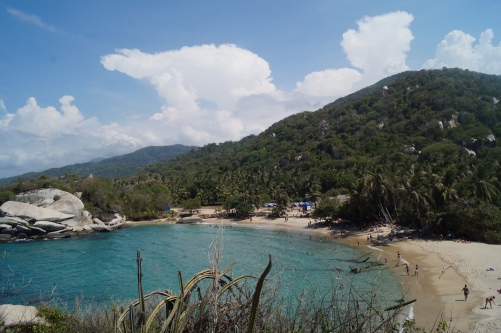 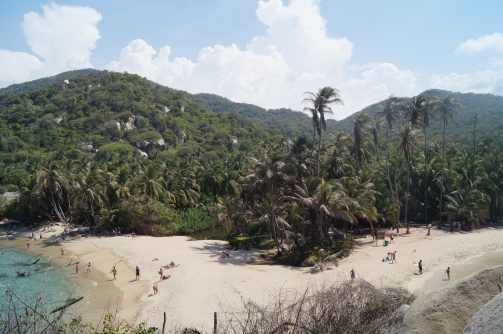 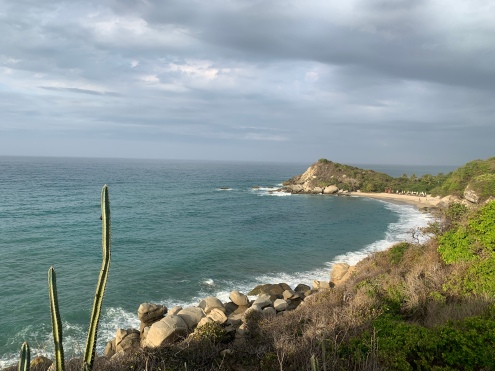 Huge PS: if you find yourself in the city of Santa Marta, eat the the best gourmet arepas at Lulo Café Bar!! 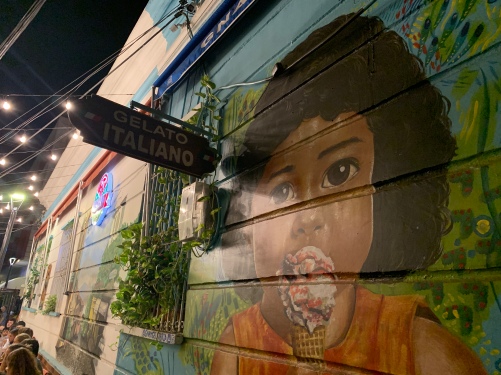