Nicaragua was another country in Central America that took my breath away! It surprised us all by its natural beauty, charming towns, welcoming citizens, and rich culture.

As you may know, Nicaragua is going through a “civil war” because of Ortega’s abusive government and aggressive response to peaceful protests—hundreds of people have been killed. Since the country is facing turbulent times, many tourists refrained to come, resulting in the majority of businesses closing down (Nicaragua’s economy relies on tourism). Nevertheless, we decided to avoid the bigger cities, where most of protests were taking place, and visited smaller and quieter towns. Bingo! We couldn’t have had a better time in Nicaragua and we all, my family and I, agreed that it was one of our favorite destinations so far!

Our first stop in the country was in Leon, the second largest city in Nicaragua located near Rio Chiquito. Our visit was quick but very interesting! Like most Central American towns, I recommend doing everything on foot; thus, we strolled around Leon’s downtown and markets, toured the rooftops of the Catedral de la Asunción de María de Leon, visited a few other cathedrals, and grabbed lunch at the renowned asador: Prokys House.

I highly recommend taking the tour at the Catedral because, besides its grandeur, the tour is extremely informative, and the view of the city from the rooftop is beautiful. The original project was meant to be built in Lyon, Peru, not Leon, Nicaragua; however, once the Spaniards noticed their mistake it was too late—it took them sixty-seven years to build the cathedral. The entire building was constructed by thousands of indigenous slaves—who died by the handfuls on a daily basis during the construction—and no iron was ever used in the infrastructure. The cathedral was entirely made of a bizarre mixture of eggshells, honey, and other odd “ingredients”. Anyone who sees the Catedral de la Asunción de María de Leon on street level would see a white, medium size church, but the building has a total of 40 meters of height. How? The same amount that was constructed above the ground was also dug below it (one of the main reasons of the high rates of slave deaths)! Besides its fascinating architecture, the cathedral’s rooftops giveaway an amazing view of the entire city, other antique churches, and the many, many volcanoes surrounding Leon. 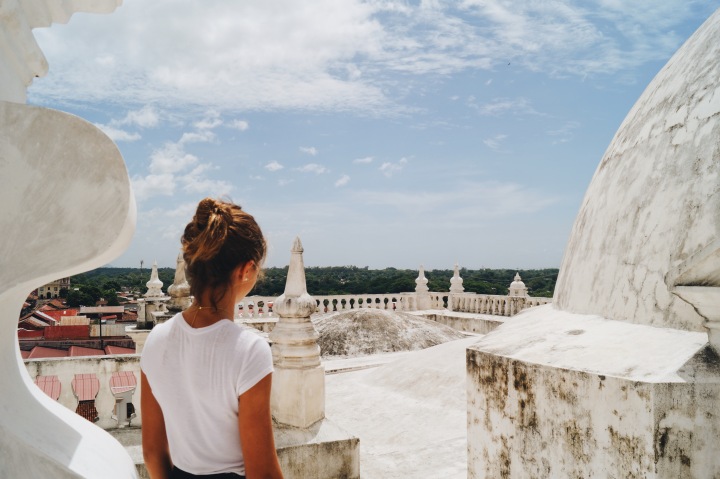 Granada, an important historic town of Nicaragua, was one of my favorite cities in Central America. It’s composed by colonial-style buildings, narrow streets, delicious restaurants and cafes, antique hotels, and museums. The city seemed to have stopped in time, as well as the local residents, who could be found in bars, at street fairs, or talking to their neighbors. The town is perfect for walking, and offers many tours to local workshops and artisan markets—such as Taller Escuela de Ceramica Valentin Lopez—and to Volcan Masaya, where one can experience an up-close encounter with lava.

Ometepe Island is the jewel of Nicaragua in my opinion. It’s situated in the middle of Lake Nicaragua and composed by twin volcanoes—Concepcion and Maderas—each situated on one extremity, giving the island a figure “8” shape. Small poblados are spread across the isle, which has narrow roads and few cars, many people use bikes and animals as means of transportation. A few great things to do while visiting Ometepe are: swim in the Ojo de Agua, a crystal-clear pool amidst the forest, which even has a swing to jump into the water; walk through a primary forest, where one can see the beauty of Nicaragua’s biodiversity; hike a volcano (or half of it), and enjoy the view of the exotic island from the top. I highly suggest renting a motorbike and tour around Ometepe, where forests and organic farms lay on the slopes of the volcanoes, and small beaches meet Lake Nicaragua’s sweet water.

One thought on “Nicaragua’s Top 3 Destinations”