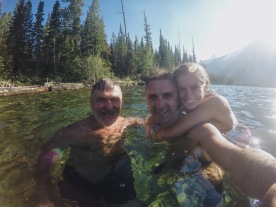 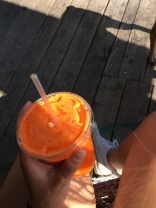 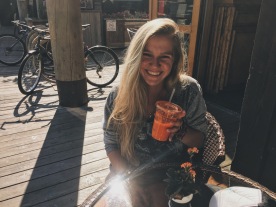 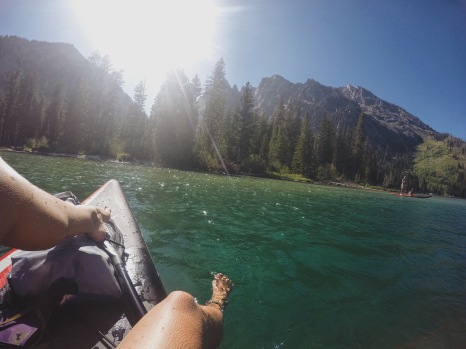 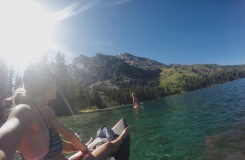 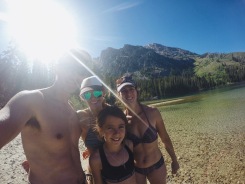 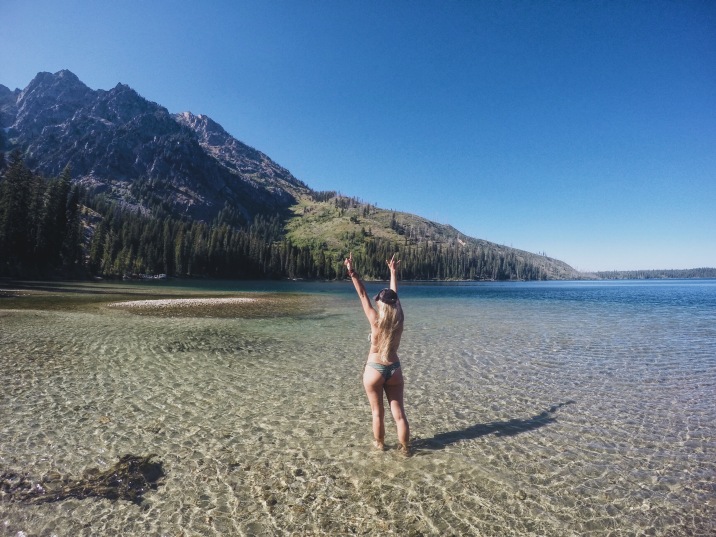 The Grand Tetons National Park is mind blowing. The dryness of the prairies contrasting with large turquoise lakes and the rocky mountains. The massive blue sky, the golden horizon dotted with small green bushes, the icy crystal-clear lakes and rivers, the dark-green conifers, the Grand Tetons rising above the lakes like skyscrapers, and the restless wildlife, all coming together as one.

On our first day at the park we decided to go on a small hike, so we took a boat that crossed Jenny Lake. As we crossed the lake, I just laid back on my seat soaking up the sunshine while the wind was wildly blowing my hair, and the closer I got to the mountains, the more beautiful they looked. The hike around the edges of the lake was gorgeous! Wild salmon berries took over and the sun rays penetrated through the trees. After rock jumping, we found a great place to bathe (we didn´t find an actual shower). The water was cool and the sun was so warm, so after bathing we laid on top of rocks to we could dry off. Afterwards we dressed up to celebrate my grandpa´s visit. Everybody looked “fancy” , so I´m pretty sure that nobody could have guessed that we had just bathed in a lake and that we were living in a rv….

Unfortunately, really early next morning, my grandpa had to leave to Brazil. Words cannot describe how nice it was to have him over and to adventure with him (weather him liking it or not…). With the airport behind us, we headed to Jackson Hole to grab breakfast. It was a sunny morning, the streets were full of tourists checking the stores out, and my G-Snaap juice was so refreshing(: Later in evening we decided to go on a hike to Phelp’s Lake. Everything was going good, we were driving to the beginning of the trail, when we saw a sign “NO rvs or buses past this point”, GREAT….there was no way we could get to the trail unless…we flagged someone down to hitch a ride (usually when unconformable situations come up, it´s my dad´s job to execute them), turns out a really nice guy from Mississippi had an extra space in his car. The hike went really good, the sun was shining and the sky was clear, we only got lost one time and had to cross a lake, but besides that everything went smooth and we found the rock we wanted to jump off. The rock was around 25-30 ft and it offered an amazing view of Phelp´s Lake, the mountains raised on my right side and the trees contoured the see-through water. Jumping off seemed like a great idea, so as I raced to the tip of the rock and jumped there was nothing but air for a couple of seconds, and then cold water surrounded  me. Everyone jumped off, and we befriended two guys, Will and Derek, who were gonna be our new drivers on the way back.  As we started hiking back, Will needed a “pee break”, so we all proceeded walking when Will yelled “Holy crap! Bear, bear!” , we all freaked out and looked around scanning the bushes for the animal, and there he was…about 20 ft away. We agreed it was a black bear cub, which made us nervous because the momma was probably somewhere around, so we kinda just kept walking while trying to take a last glimpse of the cute little cub.

The next day was really relaxed and fun, we had spent the night at the city´s visitor center, and I headed to town to grab another G-Snaap and work on my blog. After spending most of my morning using Starbucks free WiFi, I headed back “home”, or better, my home came to pick me up. Today´s plan was to go paddle boarding on Jenny Lake again. After pumping up the paddle boards, we paddled to the middle of the lake on the search of another rock to jump off. The view was gorgeous again, and the water felt so good. After jumping off the rock and befriending some locals we kept paddling, contouring the edges of the lake, and we found a special spot where the water was so blue and crystal-clear. The sun´s rays reflected on the turquoise surface, dark-green trees poked the mountains’ side, the Tetons´ peaks rose with all their splendor above the trees and a cool breeze was on and off. A perfect place. After bathing in the lake, we took off to Jackson Hole to grab some pizza (Caldera’s has really good pizza) and watch the city’s weekly rodeo, which I also recommend(:

To wrap up our visit to the Tetons and Jackson Hole, a bike ride sounded pretty sweet. The course was around 15 miles long and guess where it ended?? JENNY LAKE!! The trail cut through dry prairies, to my left the Tetons stood and to my right endless flat land with low bushes extended for miles. It was extremely hot for a bike ride, around 90s, and we started the trail right about noon, do not recommend it……at all. Thankfully, later we got to cool off by jumping in Jenny Lake. As soon as we got there, sandwiches were pulled out of the backpack. The view was great as always, and only a few people were on the rocky beach. So, whenever we go for a swim, we usually jump off from somewhere and that really makes things much easier because it’s fast. Unfortunately this time we had to do things the hard way…miserably my dad and I ambled into the freezing water, stopping every couple seconds to get used to the temperature. Well, while we took five minutes to walk a few yards, this European guy just strolled past us with the biggest smile and happily swam around us. About ten minutes later, after I finally got in, I learned the guy was from Austria and the Lake´s freezing water was nothing but warm and cozy to him.